"I hold it vital to hold the sonship before the Worlds." 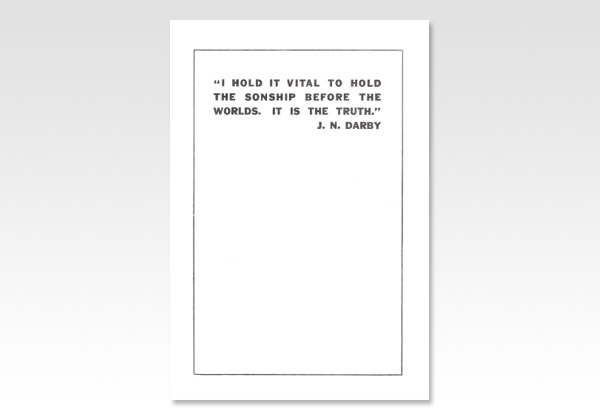 Though I have ever held this verse, to say the least, to be very doubtful from the course of the meaning, it is not to discuss this at present I write, but another point of importance - the use of the term Son.
There are those who, objecting to the term Son as applied to the divinity of our Lord, stand on the verge, if not slipping into, confusion of the Persons.
It is the name of the Person, not the nature; and the Person is personally known to us, fully in the revelation of God in Jesus.
But while no man knowing the Son but the Father, the manifestation of God in the Son - in Jesus - makes the language of man scarce preservable from error, if we wish to affirm things separately, of the natures when affirmed about the Son, yet is that which is revealed very distinct, but it is spoken about the Person into which the man was brought and therefore is rightly spoken of Jesus, and the connecting point of faith, not to know there is a Son, but that Jesus is the Son of God.
Nevertheless the works of God as such are directly attributed to the Son before the incarnation of, or rather in, Jesus, and therefore we are justified (much more than justified) in speaking of the Son as we do in the Trinity.
Thus Heb. i. has "spoken to us by the Son, ... by Whom also He made the worlds." We are therefore justified in speaking of the Son as before the worlds.
Again in Col. i. where His whole personal glory is brought out - "In Whom we have redemption" (His dear Son) "... the forgiveness of sins: Who is the image of the invisible God, the firstborn of every creature: for by Him were all things created which are in heaven and upon earth ... all things were created by Him" (i.e., the Son) "and for Him; and He is before all things," (the present state) "and by Him all things consist. And He is the bead of the body" (His official glory), "the church, ... the firstborn from the dead;...

"I hold it vital to hold the sonship before the Worlds."