PRINCIPLES OF THE ASSEMBLIES GATHERED TO THE NAME OF THE LORD 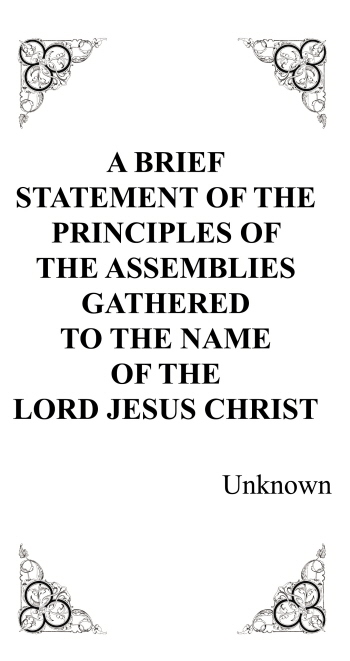 Convinced of the absolute authority of God's Word and of the completeness of its teachings, brethren who gather to the name of the Lord believe in the unity of the Church, formed on earth by the Holy Spirit, and embracing all the children of God. This unity is taught especially in the epistles of the apostle Paul, who presents it under the remarkable symbol of one body, that is, one living organism, formed of many members united in an unbreakable union (Rom.12:4-8; 1 Cor.10:17; 12:12; Eph.1:22-23; 2:16; 3:1-7; 4:1-16). The knowledge of this truth is one of the reasons why a number of Christians left all humanly-organized denominations and all independent congregations, beginning in the 1800s. The knowledge of this fact of the one body remains as one of the important reasons for their present stand.

Gathered in many places around the Lord as interdependent members of His body, these brethren have not formed any ecclesiastical organization. They simply own what God has instituted-one Church-whether others will or will not recognize this fact.

Each assembly has the responsibility to watch that the rights of the Lord are maintained as revealed in all of God'sWord, in verses such as Matthew 18:18-20; 1 Corinthians 5:9-13; 2 Corinthians 2:5-11 and 2 Timothy 2. Discipline is practiced as needed in dependence on the Lord. Every child of God is received with joy for the breaking of bread and assembly fellowship, who desires to walk according to the order presented in 1 Corinthians and 2 Timothy, which give precise regulations for the collective walk of Christians.

These brethren believe in the presence and the guidance of the Holy Spirit in the church, where every child of God is constituted a worshipper, and every one of Christ's redeemed ones is clothed with the dignity of a priest (1 Pet.2:5,9; Rev.1:6). Accordingly, the liberty of the Spirit is recognized by the brethren in the meeting for breaking bread, in the prayer meeting and in the meeting for two or three to minister theWord (1 Cor.14:29).

Those who have public gifts of the Spirit (Rom.12:5-8; Eph.4:7,11) exercise their gifts freely with due respect and submission one to the other. Others do so more privately or as reaching out to the lost in this world of sin. If a brother, called of the Lord, consecrates his life to the ministry of the Word (3 Jn.7), he goes out in his work with the approval of the brethren and with the fellowship of the assembly (Acts 13:1-3; 14:26), without this suppressing in any way his personal responsibility to the Lord. He must walk by faith and remain subject, as also every other brother, to the discipline that the assembly is held responsible by the Lord to exercise.

The women, who also have spiritual gifts, use them according to the order of the Lord. They are silent in the meetings of the assembly (1 Cor.14:34-35), do not teach or usurp authority over the men in religious settings, learn in quietness (1 Tim.2:8-12 JND), and wear a head covering whenever there is preaching or prayer (1 Cor.11:3-16), owning God's headship authority (1 Cor.11:1-16). Likewise, the men do not wear a head covering during such occasions.

There is in our country, and also elsewhere, a certain number of Christians who walk thus together in submission to these truths, gathering as interdependent assemblies. These Christians, in order to obey the Lord regarding these truths, withdraw from all denominations and independent meetings established on other principles than those revealed in God's Word. They therefore cannot permit those who are received for the breaking of bread, supposedly in submission to the Lord and HisWord in practicing these truths, to break bread in other places where these scriptural principles are not held or maintained.

Those participating at the same table express thereby their fellowship and oneness. This truth is especially brought out in 1 Corinthians 10:14-17 in connection with the Lord's Supper. Accordingly wherever the bread is broken, each one who breaks bread is identified with all who break bread there, and with those doctrines and practices that are professed there.

As a dramatic example, if any at Corinth would partake of the sacrifices offered to an idol they would express thereby- by association-fellowship with demons (1 Cor.10:19-21). Likewise, in principle, they would associate themselves with whatever wrong doctrines and practices were held by the church where they broke bread.Wherever the rights of the Lord are not recognized and bowed to, or the walk of Christians is not governed by a principle of submission to the authority of God's Word, the truth connected with the Lord's Supper is either misunderstood or rejected.

There is without question in the memorial supper of our Lord another side of the truth-the personal remembrance of the Lord-that is very precious to every redeemed one. But according to God, the memorial supper of the Lord cannot be separated from the fact that those who participate together express thereby their fellowship together and their solidarity or oneness; for the bread that represents the personal body of the Lord is also the symbol of the oneness of the body of Christ, the Church. Those who partake of that one bread are an expression of the unity of the Church, as is also the bread itself, For we, though many, are one bread and one body: for we all partakers of that one bread (1 Cor.10:17).

Since we are the objects of the immense grace of God who daily bears with us, we ought ourselves also to show patience and forbearance toward our brethren. Nevertheless those who have been received to the breaking of bread are subject to the discipline which the assembly is held responsible by the Lord to exercise. So if anyone expressing fellowship with the assembly in the breaking of bread, breaks bread elsewhere where the truth of the unity of the body and authority of the Lord are not maintained in practice, he is inconsistent with the place he has in the assembly which seeks to practice such truth. Thus, whether knowingly or not, he has denied by such practice that place and compromised the testimony rendered to the truths regarding the Assembly of God. If, after being warned and exhorted in love, such a one still perseveres in his course, he shows thereby a spirit of independence and self-will that cannot be tolerated if the scriptural truth connected with the breaking of bread is to be maintained.

Without doubt everyone who has repented of his sins and believed in his heart in the Lord Jesus is a child of God and a member of the body of Christ. Moreover there are certainly among those Christians from which we have separated, some believers who are more godly and faithful in their personal walk than many among us. We willingly acknowledge this. Thus it is necessary to understand that the motives of our separation are purely of an ecclesiastical order: that is, we are responsible to Christ as head of His body, the Church, to gather to His name alone and maintain those principles of His Word given for the guidance of His Church, and keep ourselves clear from all church organizations that ignore or set aside those principles.

If a believer continues to be mixed up with such an unscriptural order of things, separation from unscriptural church order necessarily entails ecclesiastical separation from such a believer; however, not as a believer, but because of the place he occupies in an unscriptural order of things from which we have in faithfulness to the Lord sought to walk apart.
If believers gather to break bread simply as members of the body of Christ and obey the instruction the Lord has given in the New Testament epistles, they will own all who do likewise and there will be a bond of existing fellowship between them. If it is otherwise, it is because they are not walking in obedience to the same principles. In principle, such would be gathering in independency of their brethren. Likewise, an independent gathering itself is in practice a denial of the unity of the body of Christ.

The question that each of us must answer is, is the walk of the assemblies where I seek fellowship regulated by theWord of God, and their position of separation as assemblies the result of their obedience to the Lord, or is it a position of their own, taken in self-will? Certainly we do not boast of our obedience, but we have the conviction that the grace of the Lord has placed us in the true path where every member of the body of Christ has, as such, his place.
The presence of the Lord Jesus, dead and resurrected, draws the children of God and gathers them by the power of His Holy Spirit. It is this that characterizes an assembly of God, for it is thus that we are gathered to the name of the Lord (Mt.18:20 JND). To be thus gathered to His name implies necessarily recognition of His rights, submission to His authority and obedience to His Word. Now the assembly position and discipline that must be maintained if we would have in reality the character of an assembly of God, are not incompatible with that love we owe to all the children of God. In fact true love, love according to God, must be measured by this divine standard, By this we know that we love the children of God, when we love God and keep His commandments. For this is the love of God, that we keep His commandments. And His commandments are not burdensome (1 Jn.5:2-3). Do we really believe this?

After giving this brief unfolding of these divine principles that we profess, we must confess with humiliation that our collective walk has not always been up to this level, nor has our individual walk. Nevertheless, that is no reason to abandon the truth. To guard that good thing that has been committed to us, to hold firm that which we have received by the grace of God, ought to be considered an immense privilege as well as a grave responsibility.
Edited and adapted.

PRINCIPLES OF THE ASSEMBLIES GATHERED TO THE NAME OF THE LORD