Do you break Bread? 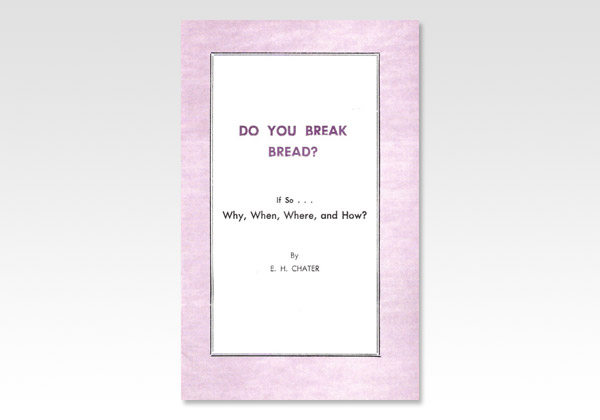 DO YOU BREAK BREAD? or
WHY, WHEN, WHERE, AND HOW SHOULD CHRISTIANS TAKE THE LORD'S SUPPER?

In the night in which Jesus was betrayed, after the passover supper, "He took bread, and gave thanks, and brake it, and gave unto them" [His disciples], "saying, This is My body which is given for you: this do in remembrance of Me. Likewise also the cup after supper, saying, This cup is the new testament in My blood, which is shed for you." Luke 22: 19, 20.
Jesus was about to go to the cross, and to the Father, leaving His beloved disciples in the world. He was going to prepare a place for them, and to return and receive them to Himself, that where He was, they might be also. Knowing the heart's forgetfulness, and the cold influence of the world, He left with them, ere He departed, this one simple, loving request, "This do in remembrance of Me."
Having offered Himself, the true Passover, upon the cross, and been buried in the grave, He was raised from the dead by the glory of the Father, and took His seat at the right hand of God (Rom. 6: 4). From thence He again speaks to the hearts of His own, to the same effect, by His servant Paul (see 1 Cor. 11: 23). The writings

Do you break Bread?