Calling upon the Lord 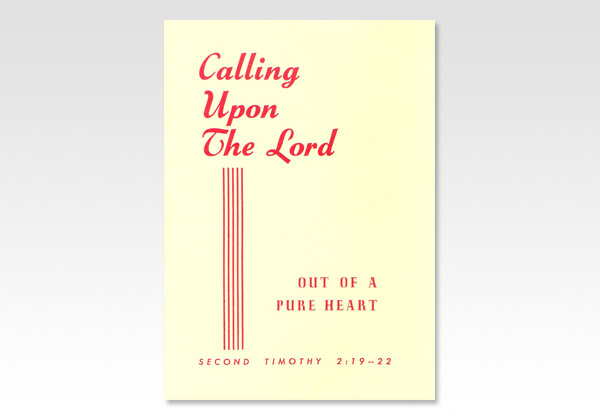 It is hoped that the ministry in the paper may prove to be of much help to each reader as to his collective associations in these end days, that we may be enabled not only to be true to THE TRUTH OF THE GOSPEL but also to THE TRUTH OF THE CHURCH and its order and associations. We now commit its republication to Him Who alone can bless.

It has often been noticed that the first epistle to Timothy instructs the man of God as to the conduct that becomes him as belonging to the house of God, while the second epistle is instruction that is to govern him in respect to the confusion and disorder that have resulted from not heeding the apostle's exhortation as to the responsibility of those who had received from him the foundation which, as a wise master builder, under divine guidance and sanction, he had laid. For those who assent to this, I do not need to say the second epistle to Timothy has special importance in connection with the times in which our lot has been cast. But I have sometimes wondered if we have fully seized the mind of the Spirit in the wisdom He has provided for us, in order that we may cope with the difficulties that confront us, and find faith's path - God's path - in the midst of them.
I desire to offer a few thoughts as to it. And, first, I think we need to get a clearer understanding of what the apostle means when he says, "According to the grace of God which is given unto me, as a wise master builder, I have laid the foundation, and another buildeth thereon" (I Cor. 3:10). Was his thought that he, in the first century of the Christian era, had laid the foundation; that the secondcentury builders would add a story to it; and that