Lord's Coming - Israel and the Church, The 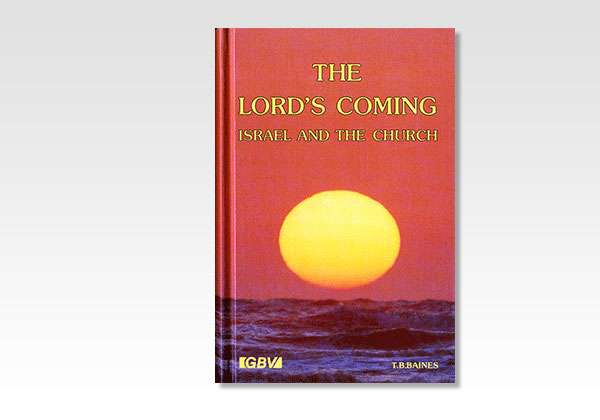 Everybody is aware of the difference prevailing among the Lord's people as to the interpretation of those passages of Scripture which foretell the future in reserve for the Church and the world. The ordinary interpretation is that the promises contained in the Psalms and Old Testament prophecies refer to the Church, which, as the spiritual Israel, has taken the place, in God's purposes, of the literal Israel, to whom these promises were given. So, the fulfillment of the promises is taken to be spiritual rather than literal, being brought about by the gradual spread of Christianity, and the blessings of peace and prosperity following the universal triumph of the gospel. This world-wide dominion of truth and happiness is presumed to be the period of a thousand years, during which Satan is bound, and the saints reign with Christ. It is supposed that at the close of this time, after another brief outbreak of Satan's craft and human wickedness, the world is destroyed; and that there is then a general resurrection of the dead, both bad and good, to be judged before the great white throne This is interpreted as the event called "the coming of the Lord," "the appearing of the Lord," "the day of the Lord;" "the end of the age" (mis-translated "world"), and "the coming of the Son of man" - names supposed all to refer to the same period, the closing up of the history, and indeed, of the existence, of the habitable globe.
There is, however, another interpretation given to the Scriptures describing these events, which may be briefly stated as follows. The Old Testament prophecies, except where manifestly figurative, are to receive a literal fulfillment. The promises given to Israel are to be made good to Israel, not to the Church. The Old Testament prophecies being thus taken from the Church, the New Testament is found to contain no prediction of the universal spread of Christianity, but, on the contrary, sad forecasts of corruption, leading to judgment, in the body professing the name of Christ. In the midst of this gloom, however, the prospect of the Lord's coming for His saints shines as a bright hope for the hearts of the faithful. This coming, the date of which is purposely left undetermined, instead of being at the end of the world, is preliminary to the judgments awaiting the world, and to the reign of Christ with His saints. When it occurs, the living saints will be caught up to meet the Lord in the air, and at the same time will take place, in part at least "the first resurrection," when the dead in Christ will be raised. Then follow the woes which usher in "the day of the Lord," when Israel is restored, Old Testament prophecy fulfilled, Satan bound, and the dominion of Christ established. on the earth. At its close Satan is loosed, the nations rebel, the world is consumed, and the "rest of the dead" are raised and judged.
I propose to inquire which of these interpretations is correct. The question is not one of mere curiosity, still less an intrusion into regions we are forbidden to tread. The distinction which our Lord draws between the servant and the friend is that "the servant knoweth not what his Lord doeth," while He told His disciples, as friends, all things that He had heard of His Father (John 15: 15). In the same discourse He promises to send "the Spirit of truth," the Comforter; to show them "things to come" (John 16: 13). Indeed, the very thought that the constant references to the future scattered through the sacred writings are not meant to be understood, carries its own refutation. And, as if foreseeing the spirit of unbelief and indifference which characterizes the present time, the Holy Ghost has, in the introduction to the Apocalypse, the most distinctively prophetic portion of the New Testament, pronounced a special blessing on those "that hear the words of this prophecy and keep those things which are written therein" (Rev. 1: 3).

Lord's Coming - Israel and the Church, The