They Shall Become One 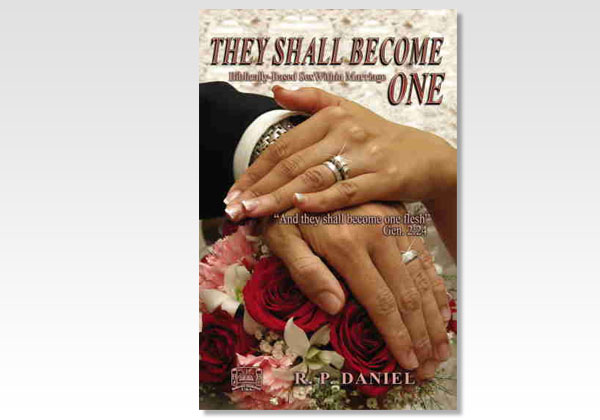 This new book has been a year and a half in the making. It is a new step forward for Believers Bookshelf USA: we believe we should not fear writing on any subject found in Scripture, and certainly the Bible is full of examples and words that speak plainly about marriage and sex.

Roger Daniel has written in plain language to younger people in books like Outlines for Christian Youth-among our all-time best sellers-and in The Road to Marriage. He seemed the logical choice to go a step further and write plainly for those about to be, or recently married. As he said in the Introduction, one learns a few things in almost 50 years of marriage!

When this book was first proposed to a group of brethren, the one definite instruction was to give a solid scriptural basis for marriage and sex within marriage, and the limits Scripture imposes. It was stated that there are many couples ignorant of biblically-based sex, which continues to cause damage to their marriage. Roger agreed to do a draft, if supported by the prayers and help of a number of brethren. This draft was sent out to those who might have some knowledge about the subject. The book finally completed much review about a month ago and has been in production since that time. We of the Bookshelf staff and Council, as does the author, thank each person who carefully reviewed the book and gave much helpful input.

This is not the book for the mere curious or those far from marriage. Therefore, it will be displayed at conferences, etc., in shrink-wrapped plastic. Although we can't insure that only those it's intended for read it, we ask that you be either (about to be) engaged or married before you order it. We will have to trust your honesty in this matter. We believe the above-mentioned book-The Road to Marriage-is much more appropriate for those exposed to the dangers of worldly sex and dating, but probably years from marriage. Many tragic sexual mistakes are made in the teenage years and also within marriage!

The first five chapters guide the reader through Scripture. There are many verses that condemn premarital sex, but just as strong a set of verses that show that God highly approves of sex within marriage-a distinction that both partners will need to have absolutely clear in their minds if they both are going to have a satisfying sexual life. Then the sexual anatomy is explained in simple, non-medical terms, along with why, with many couples, considerable adaptation is probably needed to satisfy both partners. The controversial subject of birth control is taken up, as well as other matters.

This book also would make a fine gift for engaged couples, and there are older married people who might profit from the information and techniques given. We commend it to your reading and edification!

They Shall Become One