Christian cannot set the World, The 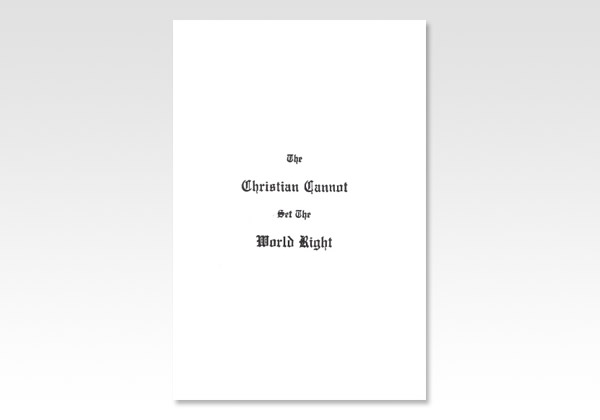 The World - the state of things around - is not what God created it at all; it is sin's making. I get His beautiful workmanship in it, but spoiled by the devil getting man's ear. The whole creation is under the bondage of corruption; that is not God's doing. It is a labour to make people happy; they seek in a thousand ways to forget God, for if they think of God they know they are lost. But there is the world of God's providence, where not a sparrow falls to the ground without Him; everything is under His Hand. He has committed authority to magistrates and so on, and He owns it. If I were innocent as Adam in Eden I should not need magistrates; now this world would be a kind of pandemonium without such. The Christian is to be subject to such authority. It may not be righteousness. I do not look for righteousness but at the right hand of God - Christ. I don't mean it ought not to be, but I don't expect it. My business is to walk as a Christian, and shew the character of Christ, not to set the world right; when Christ comes He will do that, for He will take it into His hand. If I could only set myself and other Christians right that would be the thing. The Christian should be the perfect presentation of the character of Christ in the world that has turned Him out. We are the Jiving witnesses of what we are enjoying of the Christ they won't have. The world is under judgment, but in grace God has not executed it; He is sending out His gospel.

Now there is a great system of government going on, and God owns it. There were no servants in paradise; there was no stealing. Now God owns property, etc., it is not the original thing that was instituted in goodness, nor the heavenly conditions, nor is it in itself what the Christian is (though Christianity maintains it all) - he is the expression of what Christ is; but He owns and submits to all that God has established. "Servants" here (Colossians iii. 22) is slave, and nothing but sin brought in slaves. There would never have been such a thing if sin had not been there; but the apostle does not meddle with it. He does not say he approves of it, but he leaves the government of the world just where it is. If I can relieve bodily wants as a Christian I am bound to do it, or prevent one beating another if I can do it by kindness; but I am to leave the world alone. It is hard to do it; in our hearts we don't like it. Suppose a war is going on, we wish success to one side; it was all settled before you ever heard of it. There is a hard-hearted emperor wishing Rome had one neck that he might cut it off, or setting the city on fire, and then accusing the Christians of it; well you must be subject "The powers that be are ordained of God."

Wherever I find real power exercised I find God's authority. If there is a rebellion, and other powers rise up, I am submissive as before. It is my Christian path, though not the relationship God created; there the bond is maintained on the principle of Christianity. Where it is a question of slaves it is. If you can be free use it rather; but if you are bound never mind. You are the Lord's free man, and Paul sends the runaway Onesimus back to his master. He expects Philemon to set him free, and speaks very touchingly - "I beseech thee, being such an one as Paul the aged, and now also a prisoner of Jesus Christ." But he would do nothing "without thy mind." "knowing thou wilt do more than I say." He expects grace; but he leaves the thing where he finds it. You will never set the world right; you have no principles nor power to do it. You can control an unconverted man with unconverted principles, but you can't deal with him as a Christian. If I am to set the world right I must join with the world, and can't have any principles but theirs. Then I must give up Christianity; for they have none to be governed by. You can use gracious influence as Christ did, and that we have to do. The Christian is to let his light shine, and the testimony of what his principles are is so distinct and positive that they "see your good works." If he joins with an infidel he owns infidelity can set the world right. The Christian by himself has his own gracious godly principles to act on, that the testimony may be there of what his principles can do (Christianity has reformed the world in a sense; for it brought in the pattern of things better, and they are ashamed to do in the light what they did in the dark). A man will not do what is "unworthy of a man;" but "unworthy of the Lord," you never find that; and that is where the Christian is to walk.

Paul says to masters, "You have a Master in heaven" (Col. iv. 1) who will take notice of everything you do. Your part is to show what Christianity is and does, and that is good to an infidel, or whoever it is. Your confession of Christ is to be so positive, that they should know what to attribute these things to. Let the world go on its own way, and you go yours - that is Christ's. If not, you compromise Christianity, instead of maintaining its testimony.
J. N. D.

Christian cannot set the World, The