Can Consistent Christians mingle in Politics? 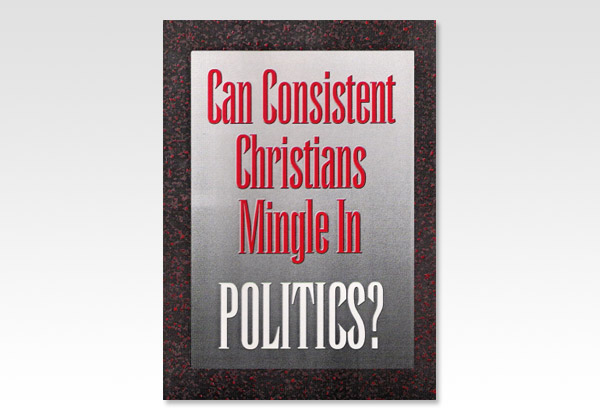 "Men are apt to think that this world is as God made it, and that all things continue as they were at the creation, only that man has made great progress in prosperity and civilization. Now, in material comforts, none will deny it, though the men of a past age would hardly think our refinements comforts. Men have telegraphs, railroads, automobiles, and airplanes;* but I hardly know in what respect they are the happier for it. It is a question if they have not excited the passions more than they have satisfied them. Children are not more obedient, families not more united, employees not more honest and respectful. Morally speaking, I do not see what the world has gained. It thinks better of itself, and vaunts its powers: I do not know that this is any advance. Christianity, as light come into the world, has made a difference. Men do not do in the light what they do in the dark. But the world is in no sense as God made it. He overrules all, has patience with it; but He never made it as it is. He made paradise, and the world has grown up as it is through man's departure from God. It has been destroyed once since because of its wickedness.
"What is the world? It is a vast system, grown up after man had departed from God, of which Satan is actually, though not by right of course, the god and the prince. It is a system sprung up, in its origin, from man's disobedience and

· Men have much more now than in the day when this was written, but the truth contained herein is only the more clearly perceived as the true character of the system of this world is more vividly portrayed and the technology of man is vastly increased. - Ed.

Can Consistent Christians mingle in Politics?