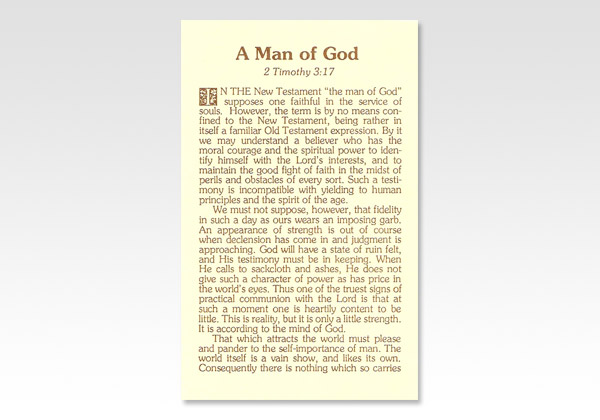 In the New Testament "the man of God" supposes one faithful in the service of souls. However, the term is by no means confined to the New Testament, being rather in itself a familiar Old Testament expression. By it we may understand a believer who has the moral courage and the spiritual power to identify himself with the Lord's interests, and to maintain the good fight of faith in the midst of perils and obstacles of every sort. Such a testimony is incompatible with yielding to human principles and the spirit of the age.
We must not suppose, however, that fidelity in such a day as ours wears an imposing garb. An appearance of strength is out of course when declension has come in and judgment is approaching. God will have a state of ruin felt, and His testimony must be in keeping. When He calls to sackcloth and ashes, He does not give such a character of power as has price in the world's eyes. Thus one of the truest signs of practical communion with the Lord is that at such a moment one is heartily content to be little. This is reality, but it is only a little strength. It is according to the mind of God.
That which attracts the world must please and pander to the self-importance of man. The world itself is a vain show, and likes its own. Consequently there is nothing which so carries the mass of men along with it as that which flatters the vanity of the human mind: It may assume the lowliest air, but sinful man seeks his own honor and present exaltation. But when a servant of God is thus drawn into the spirit of men, 'he naturally shrinks back from fairly facing the solemn call of God addressed to His own, loses his bright confidence, and gets either hardened or stands in dread of the judgment of God. When Christians lose the power and reproach of the cross, philanthropy has been taken up, which gives influence among men and general activity in what men call doing good replaces the life of faith with the vain hope of staving off the evil day in their time at any rate. One need not deny zeal and earnest pursuit of what is good morally; self denial, too, one sees in spending for purposes religious or benevolent. But the man of God, now that ruin has entered the field of Christ's profession, is more urgently than ever called to be true to a crucified Christ. As surely as He is soon coming to take us on high, He will in due time appear for the judgment of every high thought and the fairest looking enterprises of men which will all be swallowed up in the yawning gulf of the apostasy.
W.K.

Back to: Biblical Characters